Dysautonomia refers to a disorder of the autonomic nervous system (ANS) that involves abnormal activation of the sympathetic and parasympathetic divisions of the ANS. Dysautonomia is a neurological disorder that encompasses a broad spectrum of symptoms. Damage to different brain structures can result in a malfunction of the Autonomic Nervous System. The Autonomic Nervous System controls the “automatic” functions of the body that we do not consciously think about, such as heart rate, blood pressure, digestion, dilation and constriction of the pupils of the eye, kidney function, and control of body temperature. People living with dysautonomia have trouble regulating these systems, which can result in lightheadedness, fainting, unstable blood pressure, abnormal heart rates, malnutrition, and in severe cases, death. Dysautonomia treatment is accomplished by rewiring proper connections within the ANS.

The autonomic nervous system is responsible for regulating a multitude of organs and functions throughout the body. Some of these functions are respiration, pupil dilation and constriction, temperature regulation, salivation, and the digestive tract. A patient experiencing ANS dysregulation may experience abnormalities in the many organs and functions the ANS regulates. For example, around one-half of POTS patients have digestive complaints. The problem is that blood flow is not matching the need, so blood is not going to the right part of the intestinal system when it needs to. As a result, these people have trouble with nausea. For a smaller percentage of patients, the trouble is that there is too much blood in parts of the intestines. The body is attempting to digest food when there is no food to digest. This leads to cramping and colicky-like symptoms. When dysautonomia treatment is effective all other secondary symptoms are fixed as well.

Movements and position changes are followed by a series of physiological changes in the human body. The maintenance of stable blood pressure during a position change is crucial to keep sufficient blood flow to the brain at all times. The inability to do so is called Orthostatic Intolerance (OI) which can lead to a condition called Positional Orthostatic Tachycardia Syndrome (POTS). Abnormal ANS function can lead to abrupt decreases in blood pressure when moving from sitting to standing. Orthostatic hypotension, POTS, Vasal-vagal, and syncope are conditions that fall under the category of dysautonomia. 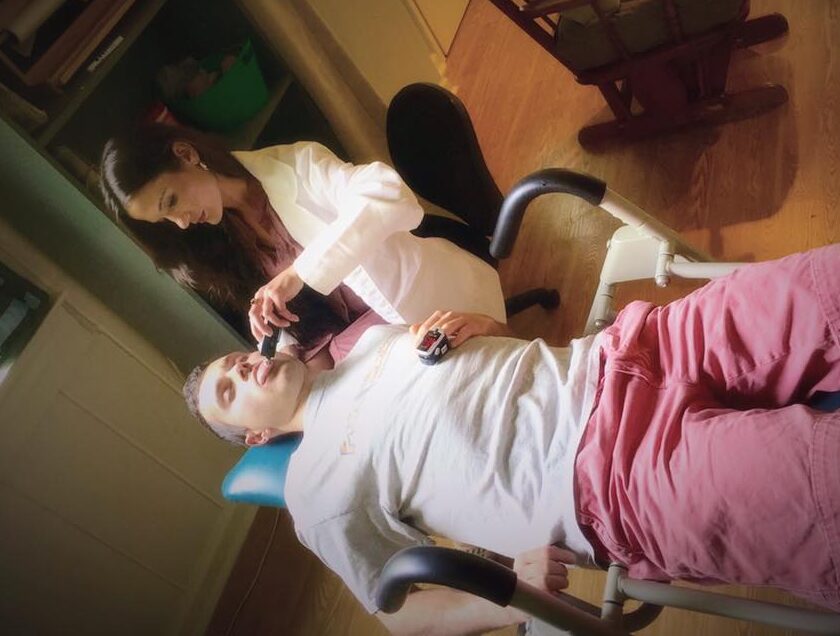 The main cause of orthostatic hypotension is an excessive decrease in cardiac output or a failure to signal vasoconstriction is blood vessels. Dysautonomia and orthostatic intolerance can lead to dizziness and syncope (fainting). A blood pressure drop upon standing is typically linked to the pooling of blood to the arteries in the lower limbs, as well as a failure of the arteries to constrict upon standing. The physiological changes accompanying POTS can be described as a temporal mismatch between cardiac output and vascular resistance. When humans change positions from sitting to standing, it is the job of the vestibular system to detect changes in gravity and signal to the sympathetic system to successfully constrict blood vessels, redistributing blood to the brain and increasing blood pressure.

The vestibular system contributes to the regulation of blood distribution in the body and blood pressure during movement and changes in posture. The autonomic nervous system includes two very important brainstem areas, the nucleus tractus solitarius and the rostral ventrolateral medulla (RVLM) which regulate the cardiovascular system. Both brainstem areas receive direct input from the vestibular nuclei. The sympathetic nervous system (SNS), controls cardiac output and regulates blood pressure. During postural changes, a range of sensory feedback mechanisms serves to increase activation of sympathetic nerves, which, among other effects, leads to increased blood pressure. A very important reflex that contributes to these mechanisms originates from the vestibular system

The vestibular organs, located in the inner ears, senses rotation by means of three semi-circular canals, and linear accelerations, including gravity, by means of the otoliths. The Vestibular system detects body position changes relative to the force of gravity and together with information provided by the visual and proprioceptive system, these somatosensory systems ensure gaze stabilization and balance as well as orientation and navigation. This task is so fundamental to life on Earth that most animals have a highly specialized vestibular system.

The vestibular system plays an important role in the activation of the SNS. The vestibulo-sympathetic reflex (VSR) is the connection between signals from the vestibular system activating the sympathetic nerves which regulate the cardiovascular system. The VSR is essential for preventing a drop in blood pressure and symptoms of orthostatic Intolerance because the VSR is activated at the onset of sensing motion. The otoliths detect a position change with respect to gravity within milliseconds, thus play a key role in the activation of the VSR.

A decreased ability to maintain blood pressure upon standing is correlated with a decreased otolith (vestibular) response suggests that POTS treatment can be accomplished by specifically activating the vestibular system. Vestibular stimulation or recalibration can, in turn, remap proper brain integrity for effective Dysautonomia treatment.